Let’s assume that you have changed your mind and want to install the faceplate by removing the collar from the latch. But do you know how to remove drive in latch collar?

Removing a latch collar is not a tough job. First, remove the door knobs from both sides, and then pull off the latch from the hole. Afterward, rotate the last part of the latch body using your hand or a pair of pliers. The collar will come off after a few attempts at rotating it.

Without wasting any time let’s dive into the removal process in the following sections. Here, you’ll find some explanations that will make your concept clear than before.

Contents show
1 What Is the Drive-in Collar For?
2 How Do You Take off a Door Knob Collar?
2.1 With Screws
2.2 Without Screws
3 How to Remove Drive in Latch Collar? The Procedure
3.1 The Doorknob Section
3.2 The Latch Collar Section
3.3 Products we recommend
4 Final Words
4.1 Related posts:

What Is the Drive-in Collar For?

The Drive in collar is a hardware part used with door knob latches when you don’t have the arrangement to install a doorknob with a faceplate. In situations like this, drive-in collars come handy. Using this part saves you some time and money both.

How Do You Take off a Door Knob Collar?

Taking off the door knob collar can be done in two ways.

For doorknobs with screws, you must first undo the screws (usually two screws). After that, carefully pull back the door knob. Here you may notice a round-shaped plate is also coming with the knob, and that’s the collar.

Try rotating the plate both clockwise and anti-clockwise while holding the knob with one hand. After a few moments of constant rotation attempts, this will come apart. In some cases you may find to cover plates with another screw setup; just screw them off.

Some modern doorknobs may have fixed collars which, in that case, your plate may not come loose.

For doorknobs without screws, the removing process stays almost the same as with screws. Here the difference is in pulling the door knob. For a doorknob, without screws, you have to find a tiny hole by the knob side. After finding the hole, put in a straightened paper clip or a narrow screwdriver to either push or rotate to remove the knob set.

The screw will tell you when to stop rotating, and if there is a switch, you should push it a bit harder. You’ll hear a click sound within a short time, and your doorknob is open. Now, like the previous one, rotate and remove the cover plate.

If you want to remove door latch without screws or don’t know how to lubricate door handle, we have pretty good tutorials on each. You may find them both helpful.

How to Remove Drive in Latch Collar? The Procedure

Here, we’ll deal with two types of door knobs. And once again we’ll divide the process into two sections:

The Latch section is the same for both types of doorknobs. Here carefully remove the latch from the doorknob hole and then spot the top part. Here the top part is the collar we’re trying to remove.

Now grab the latch in one hand and slightly try to rotate the collar with bare hands or with a pliers pair. Within a few attempts, you’ll easily remove it. Here, notice two identical holes on both the latch and collar.

After successful dislocation of those holes, the collar will come off easily. Speaking of door latches in case you want to learn more about door latch removal.

We’ve enlisted some products of our choice with amazon links here. Hope you’ll find them helpful.

As of now, we’ve tried to describe all the details about how to remove drive in latch collar all by thyself. Here you’ll find all the basic knowledge along with tips and tools so that your work gets easier. But before that, we’d like to request you about maintaining safety measurements, no matter how much careful you’re. Best wishes. 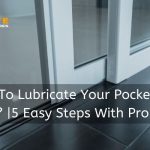 How To Lubricate Your Pocket Door? |5 Easy Steps With Pro Tips 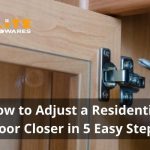 How to Adjust a Residential Door Closer in 5 Easy Steps